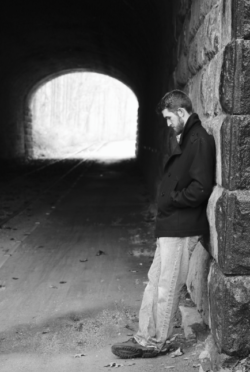 I remember at six years old after just starting the new year and a few weeks into the year. They finally diagnosed me with Dyslexia. I was told I’m going to a different school because the current school I was attending couldn’t help me and give me enough support. I was a mess, I remember crying and crying. Leaving all my friend’s I had, all because I was different.

As the years went on and still struggling with school, things never changed. Everything around me was changing and were growing up, except for me when it came to school, I was the same still struggling. I was near the end of elementary school and in middle school, say 7th grade. My reading level and everything else was still stuck in elementary school a few grades behind me. That’s going to mess with a little kid, how do you teach that and explain to a little kid? It’s ok Peter you will understand and figure it out soon enough.

I didn’t believe those lies and that crap people were filling my head with. I knew I was stupid and different and I hated it. How embarrassing and how much of a loser am I? I’m now in 8th grade, or just starting freshman year in high school. My reading and spelling were still stuck in middle school. How much longer till I graduate and finally free from this prison and hell I was in?

In high school it was different, I still was dealing with the same issues as the years before. I used my Dyslexia as an excuse, I didn’t care anymore I gave up and was lazy. I tried sometimes, but I didn’t care I didn’t know what was next for me after I graduate. All I knew is I was not going to college, you couldn’t pay me enough to go through four more years of this.

Once graduation day came and I officially got my diploma, was of course very exciting for me. Now on the flip side, it was also very terrifying for me. I had no idea what was next or what direction I was supposed to head in. It was dark out and I was walking blind into this tunnel in front of me, I couldn’t see anything. I didn’t like where I was, so I decided to keep walking blindly into more darkens ahead of me.

With my issues in school and now officially being diagnosed with Dyslexia. With that, I developed a lot of personal issues over the years. Now with where I am looking back, I can say it was a blessing in disguise.It took a long time to finally think that, and some days I still struggle with thinking it’s a gift and not calling myself stupid again and trying to pity myself.

At a young age with feeling embarrassed and ashamed of who I am. Let’s just say I struggled in a lot of areas in life, even outside of school. I was always angry and developed a temper from this. I had no confidence and was very self-conscious in myself over the years. Again, with being embarrassed and thinking as the years went on. What did I do wrong, why am I being punished? I would rip myself apart numerous times a day.

If I spelled something wrong or messed up in school whatever the situation was I would get so angry at myself. I would call myself all kinds of names. All I would see is red, and snap. Good job stupid you can’t even spell that or why are you so dumb? What can you really accomplish in life? Who would want to date me you with these issues anyway? This mindset all started at a very young age, that’s why it hasn’t been an easy fix.

If I knew what I knew now at age six. If I knew where I would be and what I would be doing 20 years later, I would die laughing and thinking that’s hilarious and not true. Peter A Harrower, has written three books and now has a website and blog about his life and sharing it with the world, no way that’s a lie? I’m a very private person and always have been there’s no way he’s sharing how he really feels and who he really is with the world? There’s no way he has read almost 40 books in three years? In my school career, I could probably count the number of books I read on one hand.

It’s true, I would never have imagined I would be chasing some of the goals and dreams I have to this day. Every once and awhile I still catch myself laughing about it thinking it’s fake and not real. I’m not saying all this looking for praise or pity, or whatever you want to call it. I’m saying all this because it doesn’t matter where you came from or what happened in the past.

If you keep working and keep going the sky is the limit with what you can accomplish and do. I’m living proof of that, and I know first-hand what you’re capable of doing if you put your mind to something. If I can do it and take a risk and gamble on something far out of my reach, so can you. Who know’s if this little dream of mine will even work. What I do know is, there’s only one way to find out.

11 thoughts on “Battling School With Dyslexia”