I’m sure you have two things probably running through your head. Either who is Pac, or why I’m writing about him? Who is Tupac; I’ll save you all of the little details about him growing up. He is a poet, rapper, actor and truly one of the bests to ever do it. If you ask me I think he’s the best, that’s just my opinion aka the (goat). He was way more than just a rapper and actor and poet. He was human he made mistakes he did stupid stuff that he regretted or wish he didn’t do. I’m sure you did as well. He was very talented, and he went to a performing arts school in Baltimore. He made albums, acted in a few movies and made poetry all before he died.

Unfortunately, he died at the young age of 25, back on September 13, 1996. Yes, that’s today; it’s crazy to think that depending on where you were born and the time you were born really does make a big difference in what you do with yourself or in your life. I know it might be obvious or sound stupid, but it’s true. He definitely did not have the easiest life. Being born in New York, and then going to Baltimore and then up to California. Compared to me. I was born Lancaster PA. Not a big area or a popular area where you could get into more trouble and crazy stuff happening on a regular basis. Well going back to when I was born in 1990 at least.

One day when I was at work, I wish I could remember the song but I don’t. A 2pac song came on. A guy I worked with was telling me about Pac and some background about him. I wanted to hear more, about one of the best if not one of the best to ever do it. Google is the best very helpful, especially on work time, don’t tell. I looked him up and I found a book about him, Tupac Shakur: The Life and Times of an American Icon.

Not only was I hooked on the first few pages reading it. Honestly, cover to cover it was probably the second maybe the third book I ever read up to that point. I hated reading as I have said before, and it took a lot for me to read. I was slow but I finished the book and I was hooked.

For a long time, I was upset with the man. I would listen to his music constantly; I then purchased his book with his poems The Rose That Grew from Concrete. Again I was amazed and hooked even more. His words it was something about it, as cliché as it sounds his poems and some of his songs spoke to me. I can’t really explain it any more than that; it was what I needed to hear at the time and where I was in life.

Yes, this is a letter paying respect to Pac and honoring him, but for me personally its way more than that. Pac is the reason that I started chasing my dream that I have been hunting for the last six years. When I started writing in August of 2011. Pac was killed in 1996, so 15 years later his voice is still being heard. His poems and songs are still being listened to and read.

For me, though it’s simple and whenever somebody asks me how I got started writing and fell into this life. It’s a simple answer; first God gave me everything I needed to put it all together. After all, he gave me life and my Learning Disability, to begin with, all the situation’s that happened or I was a part of. He made them all happen for a reason. I strongly believe Pac was the final step to pick up a pen and started journaling. Thanks, Pac.

Again, first and for most as a Christian, I believe God already has everything figured out. I’m not taking anything away from him. I just think Tupac was that last little nugget I needed to start this new journey that was waiting for me. I easily could have just read stuff online or just started listening to his music and that was it. With how much I hated reading, I was fascinated and hooked and determined to finish what I started.

Pac wasn’t perfect, he did a lot of stuff I didn’t agree with and said a lot of stuff I wasn’t crazy about. Again we definitely lived two different lives no question about it. My earlier years were a lot easier than his, I won’t deny it I had both parents and lived in the suburbs of Lancaster PA. He was raised mostly by his mother, and he moved a lot and bouncing all over and at times he did what he had to do to survive and get by.

I personally wasn’t crazy about his personal life and how he lived it every day. I mean really who am I to judge him or criticize the guy anyway? We lived in two different worlds, maybe his life was all he knew and that’s what he learned at a young age. In his early 20s, he was rapping acting and selling millions of CDs and sharing his mind with the world and what he thought about.

Compare that to my early 20s, it was a whole different world. I was living with my parents, depressed, angry, alone searching for what’s next and trying to find direction. At 25 he died and has sold over 75 million records. Me now at 27 I feel like I’m only getting started in the world and just starting to find that motivation and purpose that he had at such a young age. Yes, I know you can’t compare people and really you shouldn’t. We both are two different people, living at different times, and have different lifestyles.

With everything I said about Pac, either you agree with what he says, his lifestyle; you like him or hate him. That’s your opinion and you’re allowed to have that, as far as my opinion. He helped me and guided me into a field and helped pushed me to start a career at the time, I had no reason belonging in. Hate him or love him, we all need to dial back and be careful not jumping to conclusions and assuming anything about people. With everything that I said, this is just a thank you letter to the man that helped change my life and helped pushed me in the direction where I’m going in now. Again first and always first for me, the glory goes to God. No matter what in the end he did everything and paved the road for me.

On earth, Pac was the person that gave me that final push and nudge I needed to go for it. Who cares if you’re scared or nervous about what’s in front of you, or the new field you might be entering in. I can’t spell; you probably noticed that on my blogs. I can’t read fast, I’m definitely not the smartest person, but I’m trying my best. What this man did his whole life, even the last five years of his life, he will do and have more of an impact than most of us combined.

You never know where motivation will come from, or who will end up motivating you to do something. So no matter what, keep your ears and eyes open and ready for what’s next. Don’t be afraid to let your voice be heard, stand up for what you believe in. 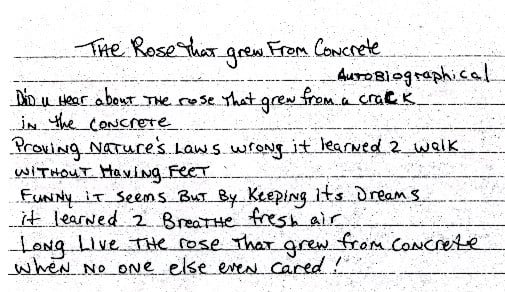 One of my favorite poems

One thought on “Thanks Pac”