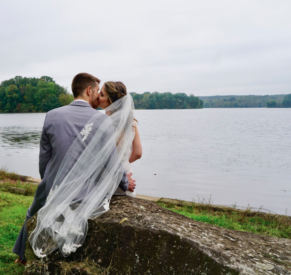 Sitting here reflecting on the last year of my marriage celebrating our first anniversary last month. Its been a great year which started back in early January. It’s a new year. I wonder what God has planned for me this year. At this point in my life, I don’t know what the heck I’m doing or where I’m going in my life. I only know two things.

First, I leave for Europe in a few months backpacking for two weeks. Second, I’m going to the Outer Banks with my family for the first time. Other than that, I’m not sure what I’ll be doing this year.

That Was  A Good Day

February 11th, was when I met Lindsay for the first time. I went backpacking across Europe for two weeks and roughly two weeks later purposed to Lindsay. I went to the Outer Banks with my family. Then a month later I went to the Outer Banks with Lindsay’s family. I was lucky and went twice that summer. 2018 what a year so far and it’s only August.

A month and a half later I married my better half. It was a quick eight-month time frame from the first date to saying I do. Then two days later we went to Mexico for are a honeymoon for a week and it was beautiful. We had a room overlooking the water seeing the sunrise and sunset. It was beautiful, what an amazing resort. By far the best vacation I have ever been on.

76 days later after getting married, I published my first book. After living and doing the research and building my story for this book for 28 years. I have been writing and working on creating the book for over four years and bringing it to life. I can’t believe I’m married and I’m a published author now.

Me Vs My Insecurities

So that was a little background as to why 2018 was a great year. But it also shows you how blessed I am. But on the flip side, I still can’t believe all of what happened. It’s still amazing and crazy looking back a short time ago and seeing where I was.

Now I have an amazing wife and some days I feel with my insecurities I don’t deserve her. Lindsay hates hearing that. It’s a battle I constantly have between my ears.

At 29 this might surprise you but I don’t have everything figured out. Shocking I know. I’m still trying to figure it out and you know what I think I always will be. For my whole life and even dating Lindsay and the first eight months of our relationship to now. I never thought I was good enough for the world. I never thought Peter could go and accomplish anything special in the world.

Now when I was younger I knew I was different my learning disability and dyslexia made that clear. But in the back of my mind, I always felt like I was going to do something special, I just didn’t know what that was. It took years and years of living and going through the ups and downs of life. I was on my life rollercoaster seeing the world and trying to figure it out.

I still have my moments and I know I still have a problem. It’s sad I know and I don’t know how to shake it and overcome it if I’m being very honest. I feel like I still haven’t accomplished enough. It’s crazy, right? I went backpacking across Europe twice and have been to almost 15 countries in my life. I’m a happily married man and a two-time published author. The most recent book I published with my wife was number 1 on Amazon’s new releases in five different categories in the first two months.

Even with all of those things I still feel like I have a lot to prove. Now, who do I need to prove myself to? It’s not to the world, my wife or family. Don’t get me wrong I want them to be proud of me especially my wife. I want her to feel safe and know I’m trying to work hard for us and to have and build a great life together. But more importantly, I feel like I have a lot to prove to myself.

I wrote some goals down when I was 25. Read 100 books, publish three books, own my own business and a few others. I wasn’t always motivated and pushing myself this much. For a good chunk of my life, I was the complete opposite that’s the reason why I started these goals. It’s not to say look at me look at what I’ve done and all of that. I don’t care about that. It’s for my own personal growth and trying to get the best out of myself.

Look at everything I did in 2018. This also ties into the first year of my marriage. It truly was the best year of my life and I’m grateful for everything that happened good and bad.

But I’m not done yet I’m only getting started. That’s what I want you to get out of this. It’s not me bragging about what I did and where I went. I’m trying to share with you that yes take in what you accomplished and what you did that’s very important, that’s something I still struggle with. I’m always moving and ready for the next thing.

There is a saying. The talent is God’s gift to you. What you do with it is your gift back to God. This is why I feel like I’m only getting started. There is more work to be done, more kids to connect with and a lot more goals to accomplish and pursue. It freaks me out sometimes but I never have been so excited to see what the years ahead look like.